Back to the Past: A Historical (and fun) Family Travel Itinerary through America’s Southwest
1895
post-template-default,single,single-post,postid-1895,single-format-standard,theme-bridge,bridge-core-3.0.1,qode-quick-links-1.0,woocommerce-no-js,qode-page-transition-enabled,ajax_fade,page_not_loaded,,qode-title-hidden,columns-3,qode-child-theme-ver-1.0.0,qode-theme-ver-28.7,qode-theme-bridge,qode_header_in_grid,cookies-not-set,wpb-js-composer js-comp-ver-6.8.0,vc_responsive 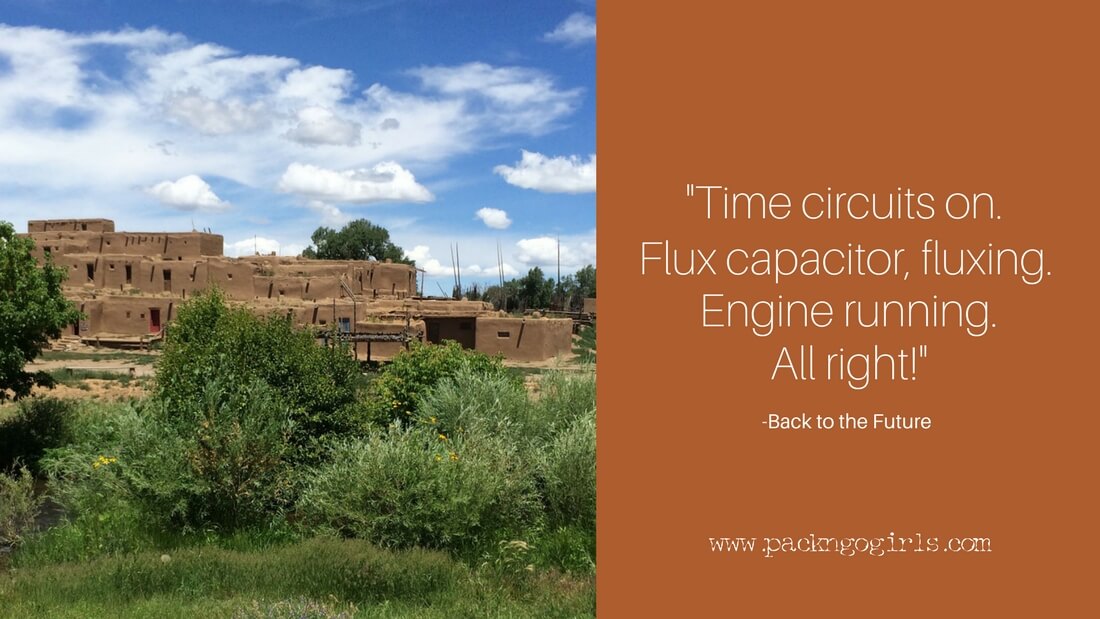 19 Jul Back to the Past: A Historical (and fun) Family Travel Itinerary through America’s Southwest

Posted at 10:25h in Travel by packngogirls

“Okay. Time circuit’s on. Flux capacitor, fluxing. Engine running. All right.”
– Back to the Future

When it’s time to go back in time, head out to America’s southwest. Catch glimpses of our country’s Native American past going back more than 1,000 years. You don’t even need a souped up Delorean. Start off in Taos, New Mexico, and wind your way around the four corners area back to Durango, Colorado. 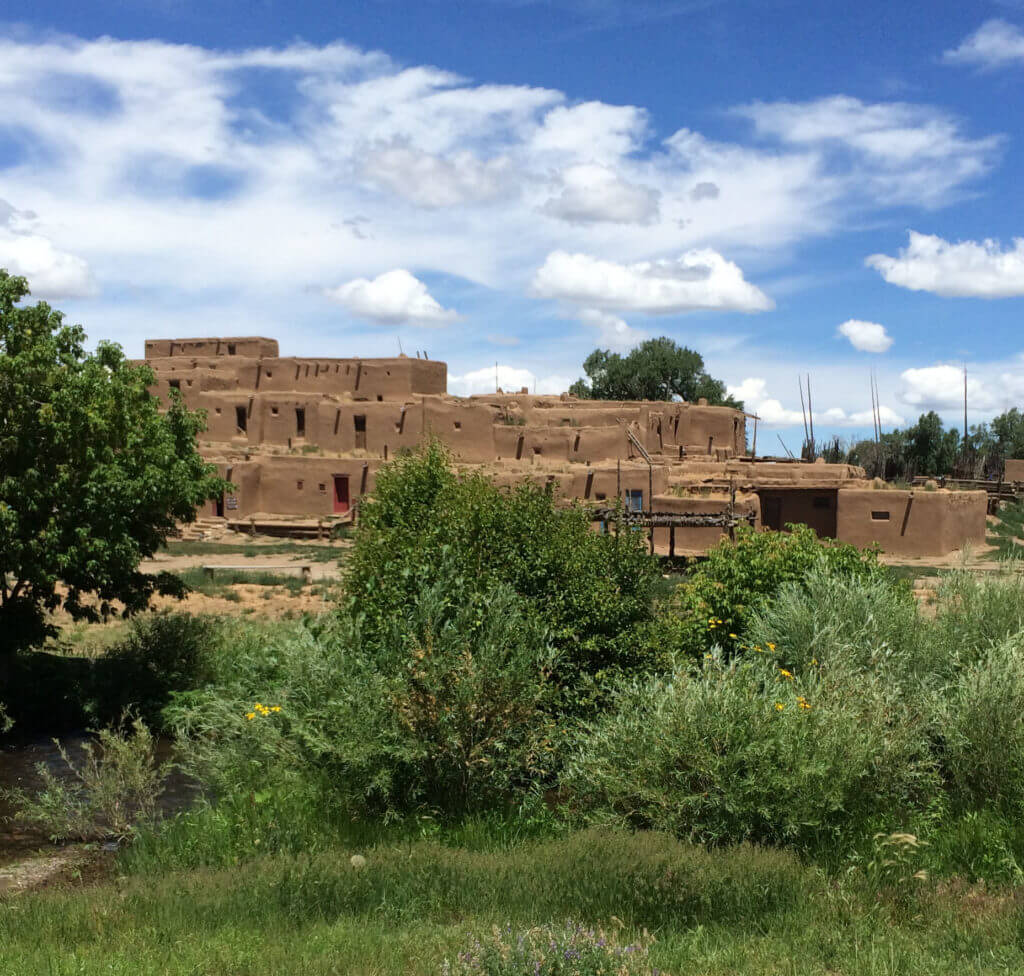 Taos Pueblo, a UNESCO world heritage site, is considered to be the oldest continuously inhabited community in the US. The two main structures, Hlaauma (North House) and Hlaukkwima (South House), are thought to be over 1000 years old. Taking a walk in the pueblo is like walking back in time. The buildings look a lot like they did when the conquistadors came through. But talk to the people of Taos Pueblo, and they’re Americans making a living just like the rest of us. Tribal members embrace tourists from all over the world, sell handmade drums, flutes,  jewelry, dream catchers, and other beautiful cultural goods, and are often happy to engage and share the stories of their ancestors, talk about the weather, share their artistic endeavors, tell about the people they’ve met (like Julia Roberts), or just inquire more about where you are from. While the pueblo buildings inspire a historical awe, you can build a lasting memory and learn more in one sincere conversation. 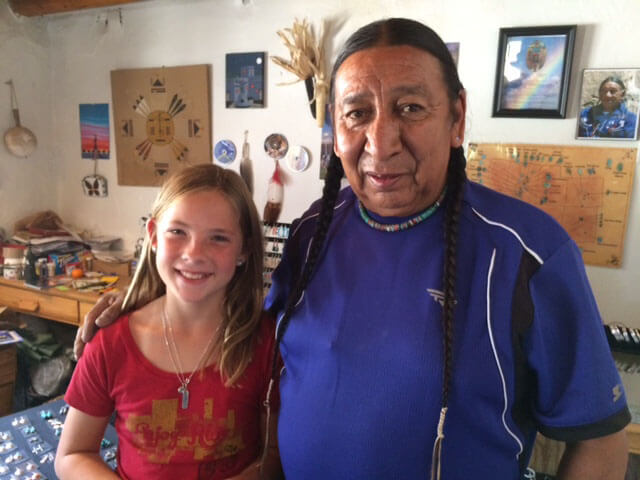 Taking the high road from Taos to Sante Fe, head on down to Chimayó. The name Chimayó comes from the Tiwa language meaning “superior red flaking stone.” Taking in the landscape during the winding drive through small Native American pueblos and vast vistas, you can see where the area gets its name. During the late 1600’s, the Spanish encouraged settlers from New Spain (Mexico) to head north and settle. Many came to the Chimayó valley. Descendents of these settlers now own the Restaurante Rancho De Chimayó, a timeless tradition for dining in this small town between Taos and Santa Fe. A stop for lunch is always on the agenda for any family friendly itinerary. 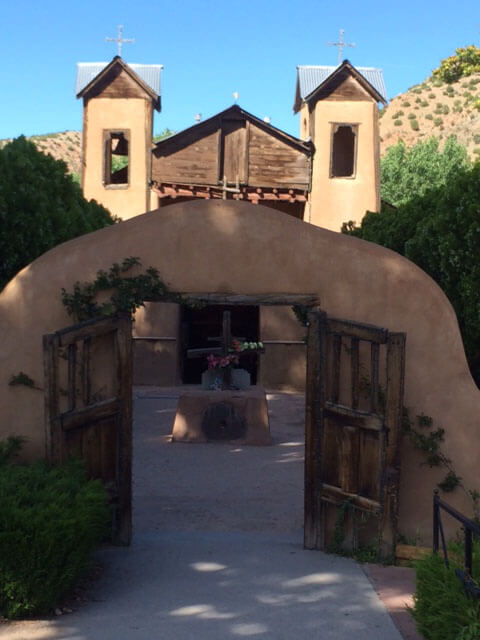 After lunch, make a quick stop at the nearby Santuario de Chimayo. Many people make a pilgrimage to this shrine for its sacred dirt, which is said to have healing powers. The hallway outside “el pocito” – the small pit of Holy Dirt – is lined with pictures of those requesting prayers and healing, along with crutches and other signs of the successful healing power attributed to the holy dirt.

The legend of Santuario de Chimayo, also called the Santuario de Nuestro Señor de Esquipulas, says that the santuario was built after a local friar performing penances saw a strange light burst from a hillside near the Santa Cruz River. Curious, the friar went to look for the source of the light. The light was coming from the ground, so he started digging in the dirt. He uncovered a crucifix that he christened Nuestro Señor de Esquipulas. The crucifix was taken in a procession to the village three times. Each time, it disappeared and was found back in the hole in the hillside. A that point, the people decided the crucifix should stay there, so they build the santuario. Then stories of miraculous healings began. There are, of course, other versions of the story, but the miracles speak for themselves. Thousands of people visit each year, and this makes a great storytelling stop.

Follow the high road further south to Santa Fe. Architecturally, Santa Fe is one of the most memorable cities in the US. Red chili peppers hanging from bright blue windows adorn the clay-colored adobe buildings. It is also filled with history. After a good night’s rest, start your day at the Palace of the Governors, built by the Spanish in 1610 as a government building. It is our country’s oldest continuously occupied public building. Visit the museum inside to take in the history of Santa Fe and New Mexico. And visit the famous Native American artists selling their wares right outside.

Next, check out Loretto Chapel. What’s so special about this church? Aside from being built in 1878, its main attraction is its stairs. Really. Legend has it that the sisters of the chapel prayed to St. Joseph, the patron saint of carpenters. Their prayers were answered when a man showed up looking for work. After his work was complete, he left without pay or thanks. What was left behind was a spiral staircase built without nails and with no apparent means of support. The design was way ahead of its time. Was it St. Joseph himself? That’s a mystery yet to be solved. What kid doesn’t like a good mystery? 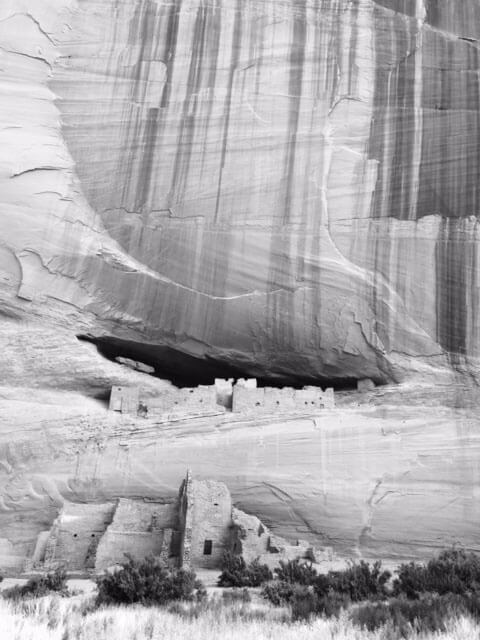 Enjoy the rest of your day in Santa Fe (there are plenty more churches, artist galleries, museums, or hikes to entertain you) or head west into the Navajo Nation.  Along the way, there are opportunities to stop and sample traditional Fry Bread or Navajo Tacos. Head through Gallup, New Mexico to Chinle, Arizona. Canyon de Chelly feels more intimate compared to its neighbor the Grand Canyon. Plus, it is yet another glimpse into our past. Stay the night at one of Chinle’s hotels or at one of the campgrounds in the area to get a fresh start exploring the canyon the next day.

Here in the canyons people have lived for nearly 5,000 years. You can see images etched and painted on the canyon walls telling the stories of the first people who lived here. The Ancestral Pueblo people followed, building the dwellings such as White House Ruins shown in this picture. As the Pueblo (750-1300) and Hopi (1300 – 1600) migrated away, the Navajo arrived (around 1700). The Navajo people, or the Diné, withstood much warfare over the years with other tribes, the Spanish, and the US military. Today, they preserve their culture and retain the spirit of their ancestors. Tourists can drive the rim of the canyon and hike into the canyon on one trail to White House Ruins. However, to truly understand the history and spirit of the canyon, hire a Navajo guide for a hike or 4-wheel drive into other areas of the canyon. In the Diné way, the guides often share the stories of their ancestors – a truly unique living history. Or, at a minimum, stop by the Cowboy Coffee held in the mornings at the visitor center to chat with the locals. We spent a few minutes discussing what life is like growing up here in the canyon versus in our hometown or in New York City . . .

After exploring the canyon, head north to Four Corners. After a brief stop battling tourists from Kansas, Ohio, and Texas to get your turn to take pictures standing in four states at one time (your kids will think it’s cool – really), head further northeast to Mesa Verde National Park. Plan at least two nights at Mesa Verde so you can get a full day to tour. There is plenty to see. 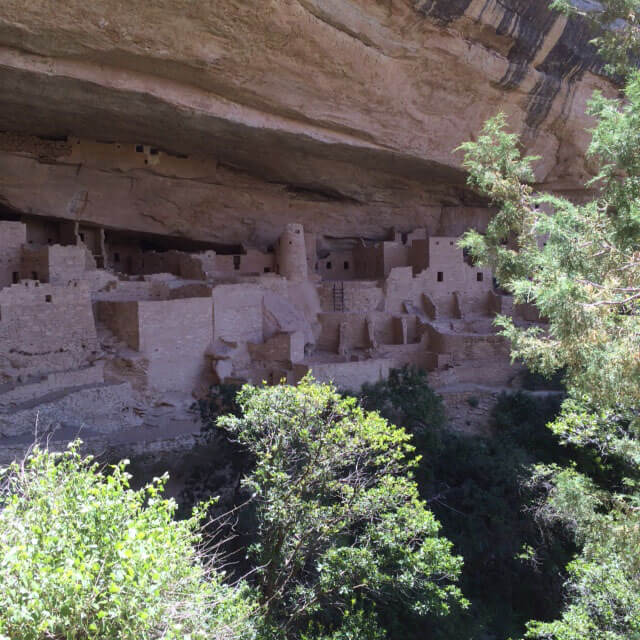 Like Canyon de Chelly, Mesa Verde preserves cliff dwellings from the Ancestral Pueblo people who lived here around 1200. Of the 600 cliff dwellings in the park, you have the opportunity to visit a few of the larger and more well preserved dwellings. Be sure to stop at the visitors center first as you will need to make reservations to tour some of the dwellings. Visit Cliff Palace (reservation required) in the morning to tour the largest cliff dwelling in North America. It had about 150 rooms, nearly 75 open spaces, and 21 kivas. Rangers tell the stories of its discovery, provide a history of the area and culture, as well as elaborate on the building, layout, and structure of the dwelling. For adventurous children, but not for infants or toddlers, tour Balcony House next (reservation required). You’ll climb three long ladders on the cliffside, navigate a steep trail with some exposure, and crawl through a short tunnel. This is one place where history meets adventure park. It’s interesting to reflect on why the dwellings were built as they were, especially at Balcony House, where the tunnel was the only entrance at the time. What were they protecting themselves from? Add on to that the unsolved questions about why the Ancestral Pueblo people moved on around 1300. Was it a drought? Social conflict? We can take clues from the archeological finds, but no one knows the real answer. More mysteries to unravel. To further explore these mysteries, take a walk down to Spruce House (no reservation required). Climb down a ladder into an enclosed kiva. In today’s pueblos, kivas are used for religious observances, social activities, and weaving. Were they used the same way in the past? It’s fun to speculate with your kids what might have been happening at the time. What does history tell us, and what stories can they imagine?

Now that you’ve had your history tour, hop in the Delorean and head back to the future where you can make a pit stop in the wild west of Silverton, soak off the dusty past at Pagosa Hot Springs, wonder if you’ve time-traveled to the wrong planet at the Great Sand Dunes, or, if you’ve gone too far, run into a few aliens from the future at the alien watch tower.

It’s all right here waiting for you in the southwest. Engine’s running.