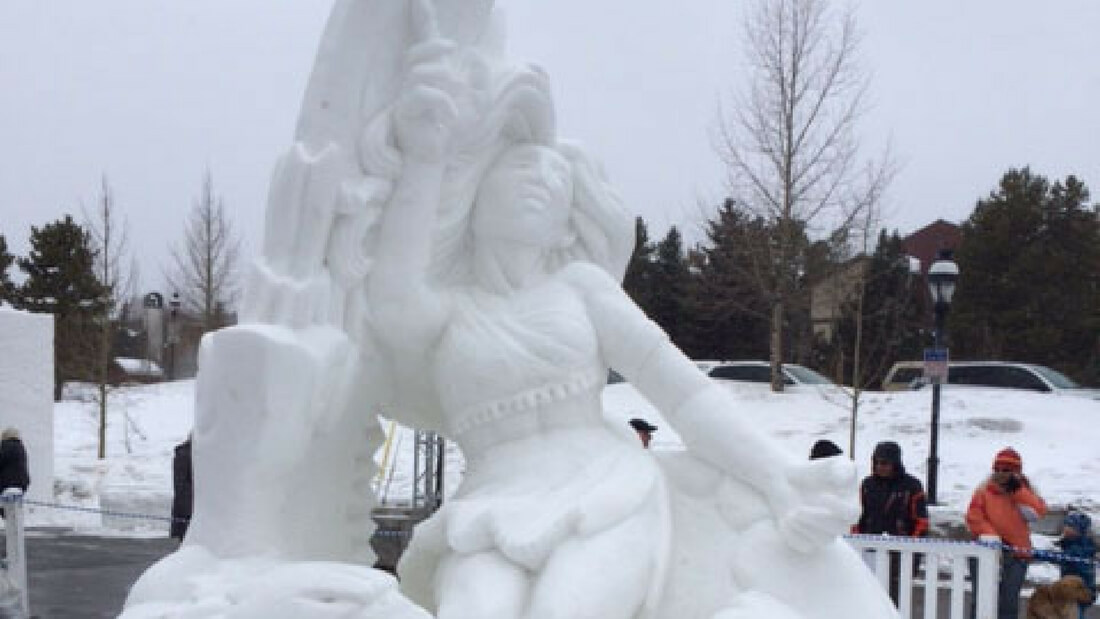 Posted at 15:08h in News by packngogirls 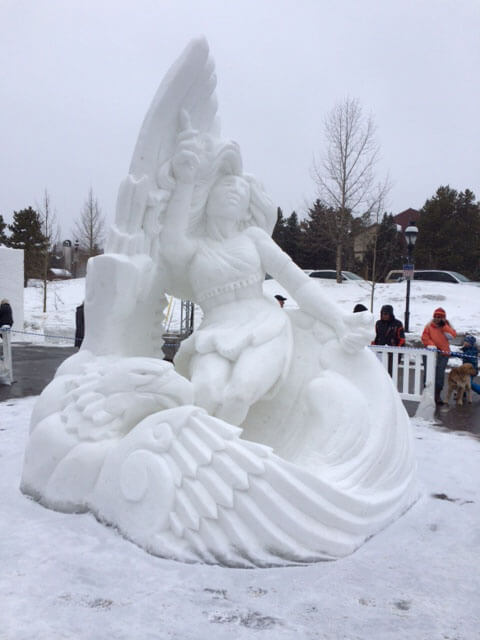 Nowadays you really don’t have to look too far to find ways to teach your children about other countries. International celebrations and competitions all around us offer opportunities to experience other cultures right here at home. A few weekends ago, we attended the International Snow Sculpture Championships in Breckenridge, CO. We have been to see the snow sculptures a couple of times. A few years ago, we went the Friday night before the competition ended. The lights were on the snow and the teams were out still carving away at 10 pm. We chatted with teams that traveled all the way from China and Germany, and my daughter practiced the Mandarin she had just learned with the Chinese team, who were surprised to hear a little American say hello and wish them a happy new year.

This year was even more special. We were so excited that our Pack-n-Go Girls illustrator, Adam Turner, was part of the competition from Team USA – Minnesota. Since Adam was there, my daughter and I decided to go watch the awards ceremony. We had never seen the awards ceremony for this competition before. It was so exciting to see teams from Mongolia, Lithuania, Argentina, Ukraine, China, Germany and even Mexico carrying their country’s flags and marching in to the tune of their country’s national anthem. Wow! Here was yet another way for my daughter and I to explore the differences in international culture and language, as well as the celebration of similar passions that span across the globe (of crazily staying up all night in the freezing cold sculpting snow). 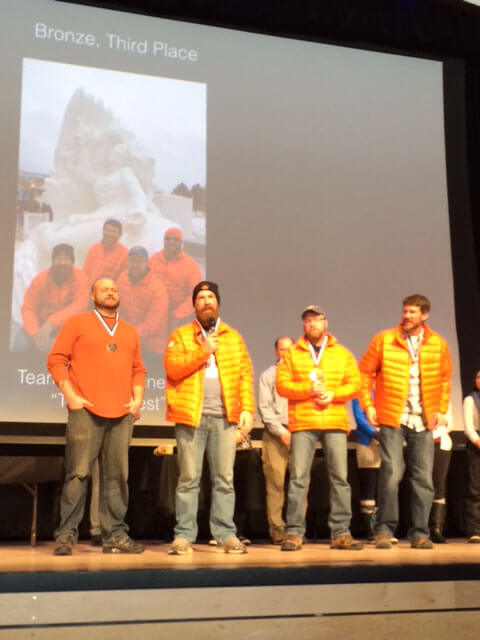 As they announced the winners of the competition, our hearts beat a little faster. Would Adam and his team from Minnesota be among them? We thought their sculpture was among our top three favorites, but would the judges? Knowing someone on a team made it all that much more exciting. As it turns out, not only is Adam a talented artist on paper, but also with snow! Team USA – Minnesota took home 3rd place. Our heartfelt congratulations go out to Adam and his team. You can see a few articles on the competition, including a picture of Adam featured in the Summit County Daily here, here, and here. You can also check out some cool videos featuring many of the teams on Breck’s Facebook page.

Since we have connections with the new snow sculpting celebrity, we thought we might take this opportunity to ask him a few questions to find out the inside scoop of participating in this competition.

What was the greatest challenge you had during the week of sculpting?
The altitude was a challenge. We all lost a lot of sleep due to acclimating to the altitude. First couple of nights I had about three of four hours of sleep, and our days involved 16 hours of sculpting . . . so, we were all pretty fatigued. 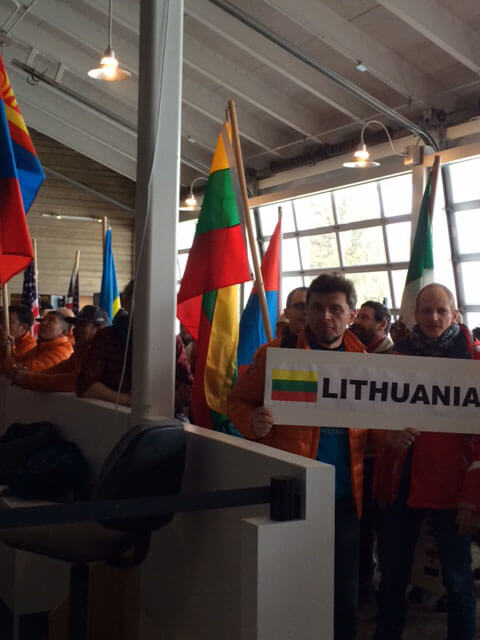 What don’t we, the tourists walking by, realize about snow sculpting?
Working in three dimensions is a challenge. Many of us concept ideas two-dimensionally, and translating those to a dynamic three-dimensional finished piece can be very difficult. Also, you have four team members attempting to embrace the identical concept and the same process from start to finish . . . that can be a real challenge. A lot of energy is spent on creating a model and sketches and clear direction in order to get everyone to share the same vision.

What did you learn by competing with other international teams?
Aside from just enjoying the international experience, each team brought insight on what they feel makes a strong sculpture. For some teams, it was customized tools that made the difference. For some, it was purity of form. For others, it was execution of the concept, and for still others, it was integrating elements from their culture into their piece. I was able to capture much of that and will appropriately integrate some of the elements into our next sculpture. 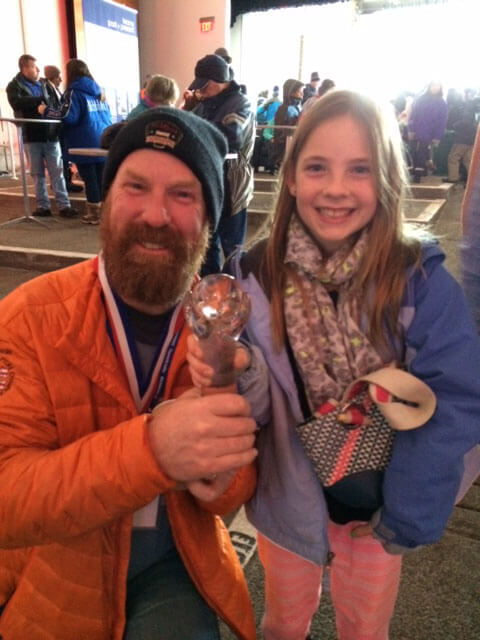 What was your favorite part about participating in the competition?
I had a few favorite parts. First, I enjoyed how the town of Breckenridge really elevated the value of the snow sculpting as a high art. Everyone in the town embraced the event and showed enormous respect for the artists and their art. Second, I enjoyed competing with other artists. There aren’t many venues around where art is the center of both a strong international community setting and a competitive venue. Both have great appeal to me. Third, hanging out and working amongst the other teams was a blast. The members of each team were unique individuals that brought both their individualism as well as commonalities from their specific culture like language or accent, clothing, mannerisms, and so on. We got to know some pretty great people while we were there, and we will likely stay in touch with some of them in the future.

Thanks, Adam, for sharing your experience with us. As a mom dedicated to bringing up a multicultural children, I am always happy for ways to talk about other countries and cultures. The Breckenridge Snow Sculpture Championships did just that. Thanks to Breckenridge for hosting this international competition every year and bringing yet another opportunity to experience other cultures right to our doorsteps. Keep an eye out for these kinds of experiences at your doorstep!