Posted at 17:01h in Travel by packngogirls

I’d just left my job of eight years with a high-tech company and was venturing into the world of contracting. It was scary because if they didn’t love me, they’d leave me. No notice, no severance pay, no unemployment benefits. I had to rock from the first day.

My first gig for the company was in Singapore, land of illegal chewing gum notoriety. It was January and I was thrilled to be in a tropical climate instead of the Colorado snow. I arrived at the airport about midnight, which was noon the previous day according to my body. I’d been traveling for somewhere around 20 hours, though, and admittedly was pretty confused about what time it actually was.

I stepped up to the immigration officer, handed him my passport, and cheerfully said hello. It wasn’t my first time in Singapore, so I wasn’t chewing gum.

The passport officer looked at me. Looked at my passport. Did not do the usual bam, bam, “Welcome to Singapore.” Instead, he looked at me again and said, “I can’t let you into the country. You’re traveling on an invalid passport.”

My brain, scrambled from too many hours of travel, couldn’t process this information. “What?” I said.

“Your passport is expired,” he said.

“That can’t be right. It doesn’t expire until June.”

“That’s right,” he said a bit too self-righteously for my body clock. “We don’t allow anyone in the country with a passport that will expire in the next six months.”

“What?” Brain fog severely limited my vocabulary. However, even in the moment it seemed to me that this was an entirely new definition of the word “expiration.”

“Where are you going after this?”

“Thailand.” Small things to be grateful for: I could remember the next country on my itinerary.

“Oh, well,” he huffed. “Thailand is much stricter than Singapore when it comes to expiration dates. They definitely won’t let you in.”

As you can imagine, we had quite the spirited conversation the next few minutes since if I couldn’t get into the country, I would be fired before I ever started my job. It ended on an unexpectedly happy note. He let me into Singapore to do my two weeks of work as long as I promised to take care of my little passport expiration issue. I would have kissed his feet, but he was in a booth and the door was locked.

I was lucky. I skipped a morning of work and grabbed a cab to the American Consulate. Apparently no strangers to Passport Renewal Panic, they were prepared. They even had one of those instant photo booths.

I got my picture taken, filled out the paperwork, and a week later picked up my renewed passport. 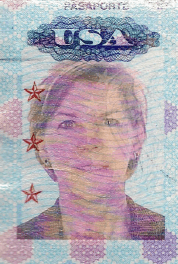 I was legal again.

I checked my new passport, thinking perhaps I’d missed the fine print. Nope. Nothing there. If this hadn’t been forever branded onto my brain, I wouldn’t be reminded of the information from perusing my passport.

After the trauma passed, I started checking with other frequent travelers. Here’s my unofficial tally of people who knew the six-month expiration rule:
Americans: 0%
Canadians: 0%
Europeans: 100%
Asians: 100%
Australians: 100%

I don’t know about you, but this suggests to me that perhaps there could be more communication about this. It turns out that not every country requires a six-month cushion. That’s the good news. The bad news? No one is going to tell you about the passport requirement before you get on the plane.