The Great Divide: From Banff, Alberta, to the end of the trees in Wyoming
1195
post-template-default,single,single-post,postid-1195,single-format-standard,theme-bridge,bridge-core-3.0.2,qode-quick-links-1.0,woocommerce-no-js,qode-page-transition-enabled,ajax_fade,page_not_loaded,,columns-3,qode-child-theme-ver-1.0.0,qode-theme-ver-28.8,qode-theme-bridge,qode_header_in_grid,wpb-js-composer js-comp-ver-6.9.0,vc_responsive 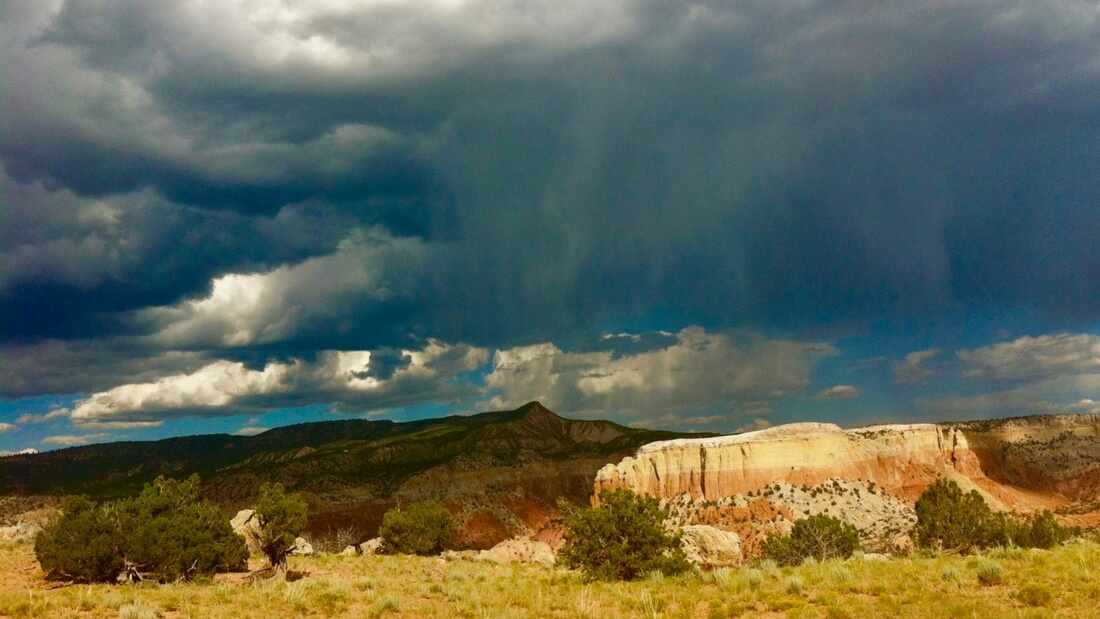 15 Aug The Great Divide: From Banff, Alberta, to the end of the trees in Wyoming

Posted at 18:51h in Travel by packngogirls

My heart always sings on the back roads. I can blame it on my childhood. In the ‘50s and ‘60s, as the interstate system was still connecting dots on the map, we mostly had only those ribbons of two-lane blacktop roads in the Midwest and West. Sometimes we had shoulders. Sometimes we didn’t. Most towns had at least a one-pump gas station, with a mechanic clanking away in a garage nearby. You could always count on a mom and pop diner, which most of the time offered state fair worthy pies.

This summer, I found myself once again off the interstate system. My husband and our younger son embarked on a father-son adventure of grandiose proportions. They decided to ride motorcycles down the Great Divide from Banff, Alberta, to Antelope Wells, NM, which kisses the Mexican Border. The trail, the longest off pavement route in the world, is a well-defined journey through the Rocky Mountains. It sort of follows the Continental Divide, but it meanders well off the track as well. The map takes bicyclers and motorcyclists on dirt and gravel roads that double as range and fire roads, over some heart-stopping climbs on rocky and rutted trails, and through the most breathtaking scenery you can ever hope to come across in the Rocky Mountains.

I agreed to drive the SAG (support and gear) vehicle along the more civilized route. I didn’t know exactly what that meant. It turns out it committed me to less and gave me far more than I expected. And it reminded me once again of how vast and beautiful Canada and the US are. Here are a few of my lessons learned:

Question the GPS. On the first day, my GPS directed me onto a gravel road that led me into spectacular wilderness for an hour and then directed me on for another two hours of rutted gravel roads. A local saved me and sent me in another direction so I’d finally get to pavement again. He did warn me that the road I should take had a critically dangerous stretch—a very steep downhill section with a 1,000 foot drop off and no guardrails. He said he always drove that part of the road with his seatbelt unbuckled so he could jump out of his truck if he lost control. You can imagine how big my eyes were. The road was everything he promised. I’d include a photo, but my hands were gripping the steering wheel too tightly to take one.

Most days, the guys have the same kind of wild terrain, but they always finish the day dirty, tired, and grinning from ear to ear. I guess this is what the trip is all about.

Wise River, Montana. A great place to get truly disconnected from technology.

People talk on the backroads. Most people are in less of a rush than interstate travelers. I’ve found myself a number of times having to leave my cabin or motel room to find an internet spot—and believe me, it’s never a Starbucks. Usually, it’s the bench outside the café where I checked in. People stop to chat. I love the casual conversations which always include where are you from, where are you going, and what are you doing out here in the middle of nowhere? What a luxury it is to take the time to visit.

This is better than the zoo. Rich and varied wildlife is everywhere. The guys idled their engines within 50’ of a grizzly. We’ve seen bighorn sheep, wild goat herds, plenty of deer and antelope, lots of cows, and even wild horses and some buffalo. The guys also battled grasshopper plagues and swarms of flies. Even with full protection, it wasn’t fun.

Rain can be nasty. I’m fine in my truck. The guys on their motorcycles less so. It’s not because they get wet; that’s only uncomfortable. It’s that the trail can turn to a slick mess or a deep bog that stops them in their tracks. They watch the weather, not just because they don’t want to get caught in a disaster miles from where a truck could save them, but they need to know what the weather brought the day before so they can anticipate what the trail is like. Knowing this, I’m tuned into the weather far more than I’d be on a typical trip.

There’s plenty more to share, but I know how precious your time is, so I’ll pick this up again in a week. In the meantime, get out your map. Where can you go on a back road with your family this weekend? ~Janelle